skip to main | skip to sidebar

The long weekend is finally here. Memorial Day.  The day we honor those who serve us, and who have served us.  I'm so thankful for our military, and for my relatives who have served and honored all of us in the United States.  Please remember them this weekend as you trek around.

It's a good thing it's a long weekend, because I'm exhausted.  ThatManILove got home from the field, and that's awesome.

And this morning, ThatManILove's talking we have to go pick out a new sink (to go with the new granite for the kitchen)....and new outside furniture (to go with all the new backyard remodel).

Dude! Honey, I have things to do.  I have to finish the entries for the mega 540 golf tournament stuff and hand it back over to my friend so we can get on with the rest of the duties to get this 2 day, 2 course extravanganza pulled off next weekend.

And I have to go run around with my new friend Melissa who's moving in from Tulsa, and looking for houses.  And I have to go take pictures for more friends sometime this weekend.  We could go to GlenRose and watch Elder Son rope?  Nahhhhhh.  Too far....

And, by the way, did I tell you that I promised you'd put that awesome burn on some salmon this weekend for Melissa and her step-mom?  We gotta show some of that famous Texas hospitality, even though you've torn half of our countertops down and the rest is still in that are we ever gonna freakin' finish this remodel slightly undone state.  It'll be okay, honey.  I promise.

And honey?  Call me after you get your haircut.  I'll meet you wherever.  It'll be fun!

Email ThisBlogThis!Share to TwitterShare to FacebookShare to Pinterest
Labels: Are We Crazy, Renovation Sucks But Hopefully It Will Be Worth It, So Shoot...Me, Team Roping, ThatManILove

Update...(Can You Still Put Them Up For Adoption After 20?)

Elder Son is doing better - he's mobilized, he's up and going, and already horseback again.  I sent him a text to see what he was doing and here's how it went:
Me:  What are you doing?
ES:  Riding a bronc...he's as hard headed as me.
Me: (Oh.My.God.Does.He.Have.A.Working.Brain.Cell.??) And your leg?
ES:  It hurts but what's new?
Me: (I swear he's going to drive me to drink.) What about the doc?
ES:  Gonna be Tues or Thurs next week
I guess we'll know more then.  His Nanny got out of the hospital today, and will be recuperating at her daughter's house.  Thanks so much for your prayers, they are greatly appreciated.


As to the Younger Smartalecjustlikehisfather Son, after his last April Fool's joke - prank - I thought his dad was going to kill him Facebook event where he told the world he had just found out he was going to be  a father, he is breathing.  I swear.  I saw him.  Yesterday, he changed his FB status to "single".  I couldn't resist, I had to do it.  I posted:  "But what about the BABYYYYY?"  Soon after, one of his friends jumped in: "Oh, did your beer break up with you?  how sad."


How did that song go? "I believe the children are our future...teach them well and they will lead the way..."  RUN! RUN!!!!!!
And now, for an update on the backyard....FINALLY, things are moving along!  Artificial turf and sealing of flagstone this week...and then, in come the plants.  The pergola is now framed out, and over the next week we'll probably see it come to "be." 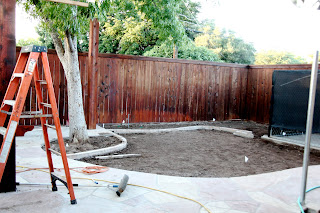 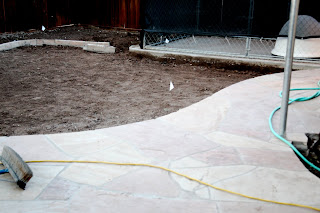 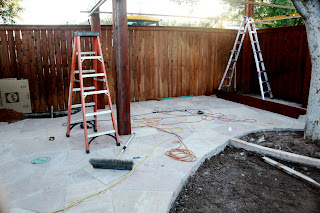 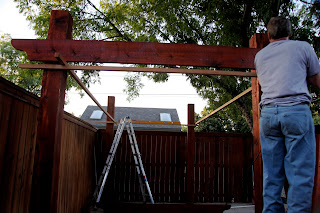 Email ThisBlogThis!Share to TwitterShare to FacebookShare to Pinterest
Labels: BackYardBlues, Come Ride With Me Down The Trail Of Mi Vida Loca, Elder Son

ThatManILove and I booked flights to go to Dallas for the day plus an overnight stay.  8am Saturday flights.  Which mean we had to be at the airport at 7 a.m.  No problem, just an everyday occurrence at the Sounding Forth casa.  And then...it happened. Late Friday night, I get a  call.  My son just arrived home from a long trip to Arkansas.  Twenty minutes later, around midnight, Elder Son walks through the door, saying, “Mom.  I’m here.  Will you look at my leg?”
Four plus years ago, Elder Son had a serious leg surgery that our good doctor healed with a distal realignment procedure.  Sounds easy, but it’s not, by any means.  We had problems upon problems -  he developed blood clots, lost tons of weight, then the wound would not close because he had lost so much weight the skin wouldn’t stretch, and I could go on.  One thing led to another, and it took him 4 months, home health care, and 2 subsequent surgeries before he healed up and got on with his life.
I bet you’re wondering, “Is this the same leg?”
Yes.  Darnit.  Dang the luck.  Creepers.  It’s the same leg.
ThatManILove and I  and Elder Son discussed our options.  Should we go to the Midland emergency room NOW?  The leg is hot.  Tripled in size.  Hard to the touch.  Should we go to the Lubbock emergency room, where Elder Son’s doctor lives and practices, so he could followup?  Between the three of us, we can’t get to a firm answer.
I had a thought.  I ran to get my iPhone...scrolled through the contacts...and found the good Doctor’s cell number - after all these years, I still had it. Elder Son took a picture of his leg, compared to his other leg.  And then, he forwarded the picture, and a short message to his doctor.  Amazingly, said doctor calls Elder Son immediately (remember, it’s after midnight!), and they formulate a plan for Elder Son to go to the emergency room during the daylight hours when the ortho doctor is on call.
By 1:30 a.m., it’s been decided that TMIL and I will go on our trip, but cut it down to a one day trip, with no overnight stay.  Elder Son will go with his father to the emergency room and we’ll be back that night to check on him.
We leave for Dallas at 8am, go take care of our business, have lunch with friends, and head back to the airport.  I call my son, who doesn’t answer.  I call his father, and find out that his mom, my son’s grandmother, has suffered a stroke and they’re all at the emergency room.  So, father and son are at the emergency room where they are supposed to be, but for all the wrong reasons...
We miss our direct flight, and have to fly....from Dallas to Albuquerque, and then to Midland.  Yeah.  We flew over our town, just to come back 2 hours later.
We fly into Midland, and head straight to the hospital to be with Elder Son, his dad, aunt, and cousin.  When we arrive, Nanny has been stabilized to the point that she can be moved into ICU.  We all gather in the waiting room, and then, 2 by 2, get to go into her room to see her.  She’s awake, and communicating...I’m grateful.  We love this woman!
ThatManILove and I head home, hug the WonderDogs, and hit the sack.
Today will find us at the emergency room, working on Elder Son’s leg.  We covet your prayers, for healing for both Elder Son, and his Nanny.
It’s never boring around here.


Sunday evening update:  The ER Doc drained 120cc (for some reason, that is all he would drain) of fluid from Elder Son's knee; the Doc doesn't think his knee is infected.   Nanny seems to be coming around and reports have her sitting up eating a meal this afternoon.  Thanks for your prayers!

Whassup With ThatJanieGirl Who Writes Sounding Forth?

Random sounds, thoughts and stories from a gal smack-dab in the middle of the Oilpatch of West Texas. Said gal loves the Lord, her man, her sons, the oilfield, shooting sports, hunting, photography, and last, but far from least, her German Shorthair pointers, Zack the Wonder Dog and Zanna the Wonder Pup.

That Janie Girl
Oilpatch, Texas, United States
My husband believes I may be addicted to over-sharing via this blog. But that's his problem, right? 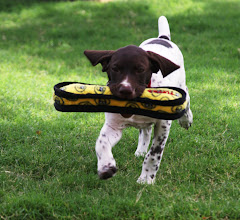 More of My Favorite Blogs

West Texas Blogs - Check 'em out, pardner, they're all good!